An obvious way to estimate the state-value function which is the expected return starting from that state from experience, is to average the returns observed after visits to that state. This idea underlies all Monte Carlo methods.

In particular, suppose we wish to estimate $v_\pi(s)$, the value of a state $s$ under policy $\pi$, given a set of episodes obtained by following $\pi$ and passing through $s$. Each occurrence of state $s$ in an episode is called a visit to $s$. The first-visit MC method estimates $v_\pi(s)$ as the average of the returns following from first visits to $s$, whereas every-visit MC method averages the returns following all visits to $s$.

An important fact about Monte Carlo method methods is that the estimates for each state are independent. The estimate for one state does not build upon the estimate of any other state, as is the case in DP.

If a model is not available, then it is particularly useful to estimate action values rather than state values. The Monte Carlo methods for this this are essentially the same as just presented for state values, except now we talk about visits to a state–action pair rather than to a state. A state–action pair $s, a$ is said to be visited in an episode if ever the state $s$ is visited and action $a$ is taken in it.

The only complication is that many state–action pairs may never be visited. This is the general problem of maintaining exploration. 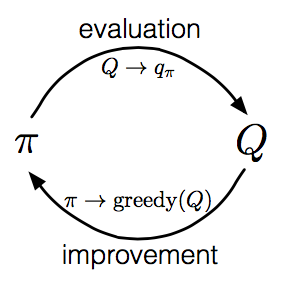 We made two unlikely assumptions in order to easily obtain guarantee of convergence for the Monte Carlo method. One was that the episodes have exploring starts, and the other was that policy evaluation could be done with an infinite number of episodes. 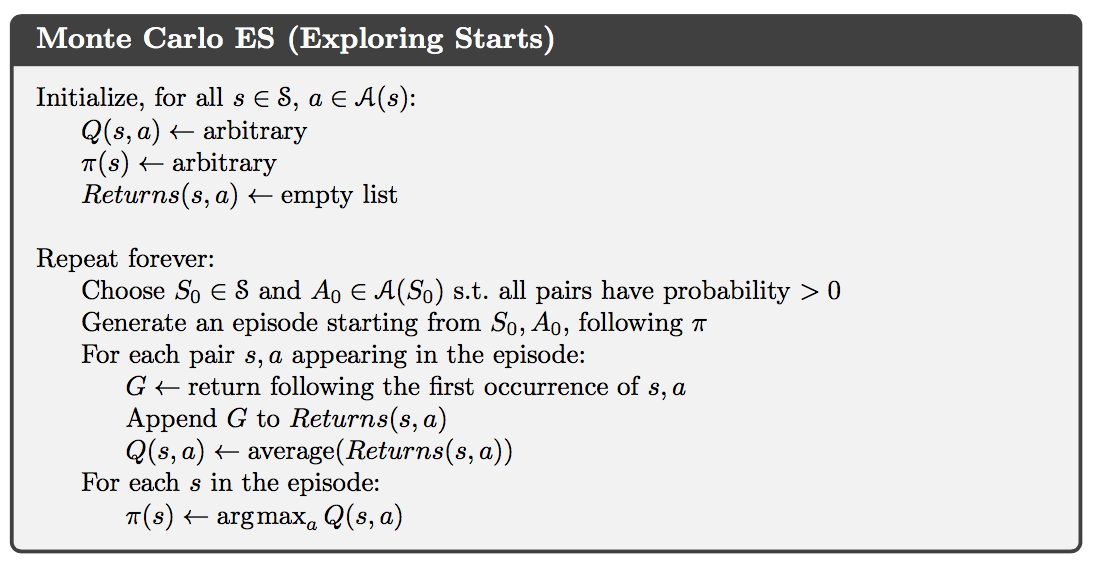 In on-policy control methods the policy is generally soft, meaning that $\pi(a \vert s)>0$ for all $s\in\mathcal{S}$ and all $a\in\mathcal{A}(s)$, but gradually shifted closer and closer to a deterministic optimal policy. 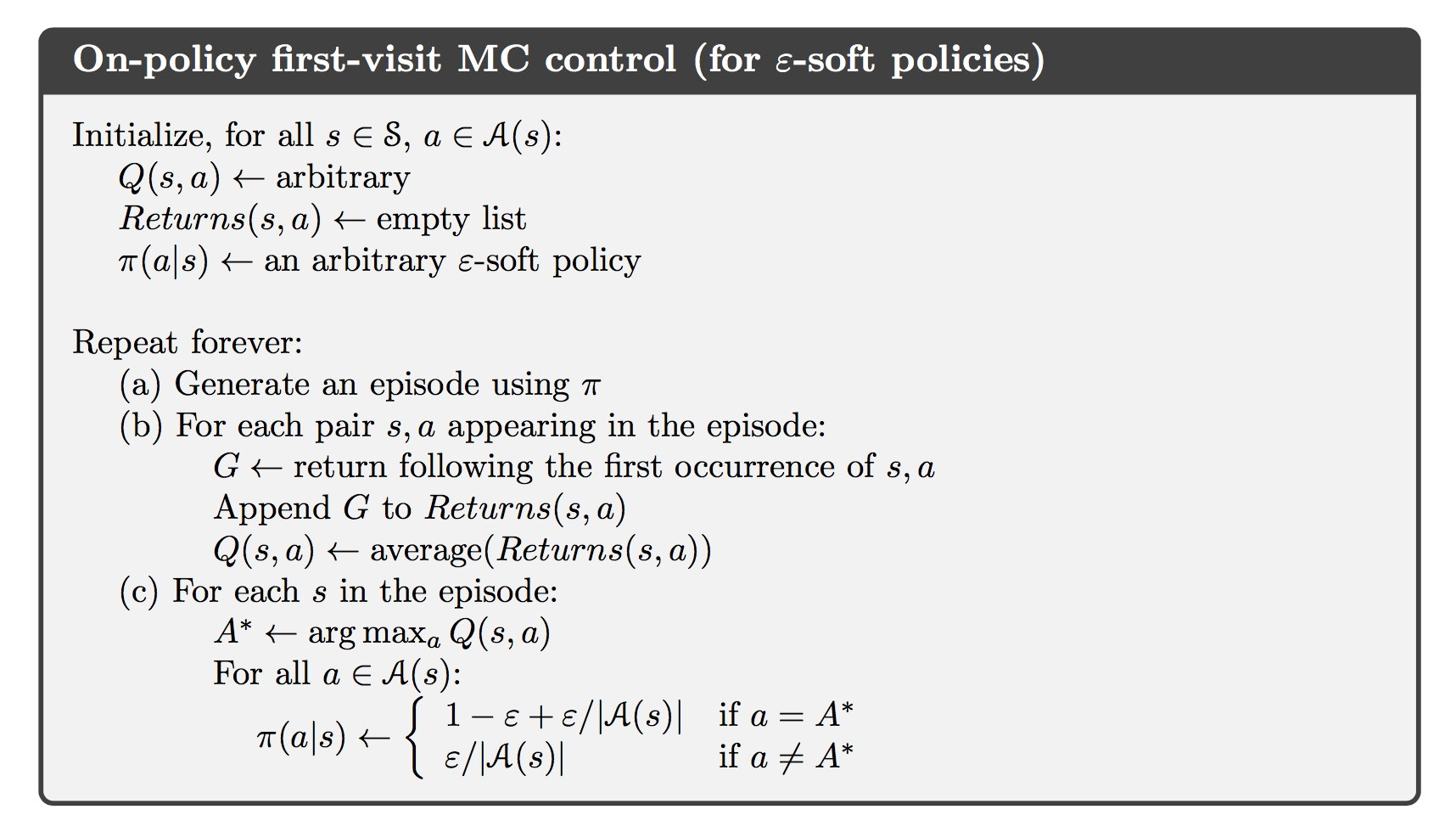 All learning control methods face a dilemma: They seek to learn action values conditional on subsequent optimal behavior, but they need to behave non-optimally in order to explore all actions (to find the optimal actions). How can they learn about the optimal policy while behaving according to an exploratory policy? The on-policy approach in the preceding section is actually a compromise. It learns action values not for the optimal policy, but for a near-optimal policy that still explores. A more straightforward approach is to use two policies, one that is learned about and that becomes the optimal policy, and one that is more exploratory and is used to gen- erate behavior. The policy being learned about is called the target policy, and the policy used to generate behavior is called the behavior policy. In this case we say that learning is from data “off” the target policy, and the overall process is termed off-policy learning.

Suppose we wish to estimate $v_\pi$ or $q_\pi$, but we have all we have are episodes following another policy $\mu$, where $\mu \ne \pi$. In this case, $\pi$ is the target policy, $\mu$ is the behavior policy, and both policies are considered fixed and given. We require that $\pi(a \vert s)>0$ implies $\mu(a \vert s)>0$. This is called the assumption of coverage.

Almost all off-policy methods utilize importance sampling, a general technique for estimating expected values under one distribution given samples from another. Given a starting state $S_t$, the probability of the subsequent state-action trajectory, $A_t,S_{t+1},A_{t+1},\dots,S_T$, occurring under any policy $\pi$ is

Thus, the relatvie probability of the trajectory under the target and behavior policies (the importance-sampling ratio) is

We can define the set of all time steps in which state is visited, denoted $\mathcal{J}(s)$. This is for an every-visit method; for a first-visit method, $\mathcal{J}(s)$ would only include time steps that were first visits to $s$ within their episodes. Also, let $T(t)$ denote the first time of termination following time $t$, and $G_t$ denote the return after $t$ up through $T(t)$. Then $\{G_t\}_{t\in\mathcal{J}(s)}$ are the returns that pertain to state $s$, and $\{\rho_t^{T(t)}\}_{t\in\mathcal{J}(s)}$ are the corresponding importance-sampling ratios. To estimate $v_{\pi}(s)$, we simply scale the returns by the ratios and average the results:

or zero if the denominator is zero. 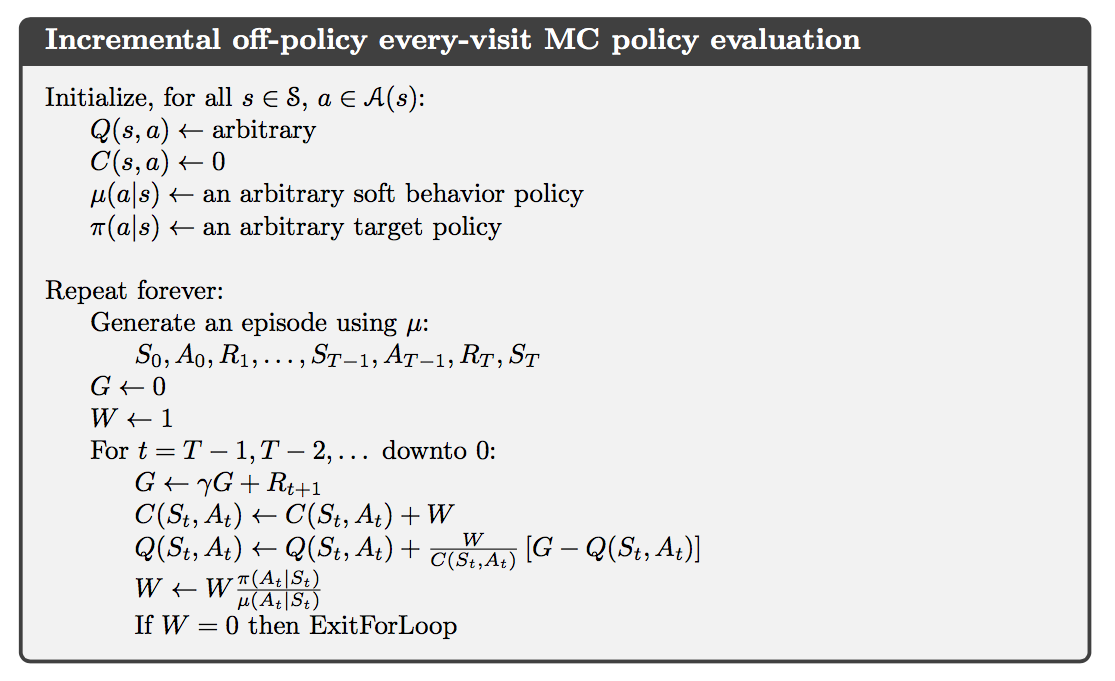 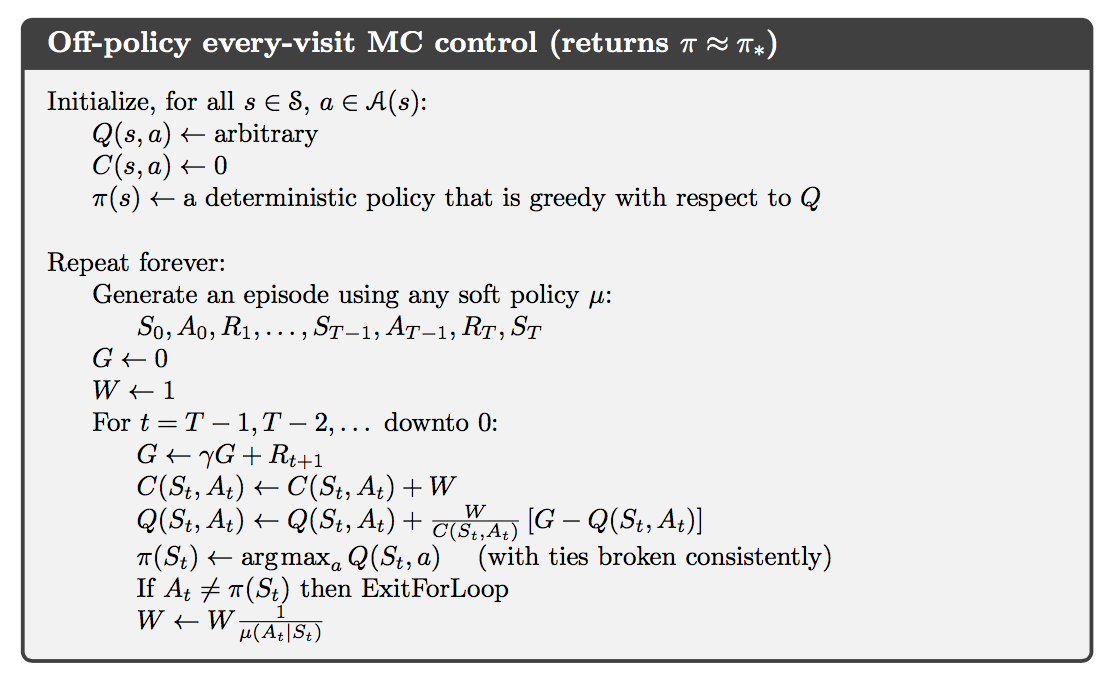 A calculated speculator seeking for risk and reward asymmetries, and a value investor sticking to the margin of safety.

Opinions posted in this blog are my own!